VX is the world’s first VoIP (Voice over IP) talkshow system — a broadcast phone system that’s so powerful it can run all of the on-air phones for your entire plant, but economical enough for stations with just two or three studios. VX connects to traditional POTS and ISDN telephone lines via standard Telco gateways. But it also connects to VoIP-based PBX systems and SIP Trunking services to take advantage of low-cost Internet-delivered phone services.

VX also weds modern networking to the remarkable power of digital signal processing. VX uses Ethernet as its connection backbone, significantly cutting the cost of phone system installation, maintenance and cabling. Ethernet is a powerful, yet simple way to share phone lines among studios and connect system components. This also makes VX naturally scalable, capable of serving even the largest of facilities — while remaining surprisingly cost-effective for even single stations with more modest needs.

VX plugs right into Axia IP-Audio networks, connecting multiple channels of audio and control via a single CAT-5 cable. Don’t have an IP-Audio network yet? No problem; optional VX interfaces break out audio into analog and digital formats, along with GPIO logic commands. And with informative new VSet phones, talent finds it easier than ever to take control of their callers, moving and sharing lines between studios at the touch of a button.

The first step to deploying VXs is ensuring you are using a compliant platform. A machine with the following specs can, at minimum, handle 64 simultaneous calls on-air, on handset, on hold, or any combination of the three: 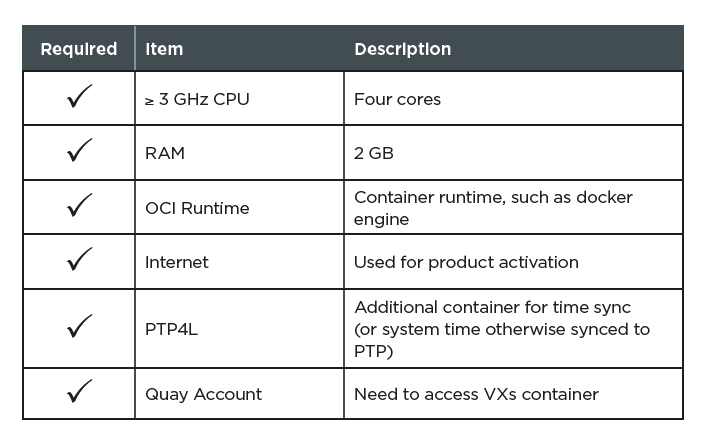 Be the first to review “Telos VX Broadcast VoIP”

This website uses cookies to improve your experience while you navigate through the website. Out of these cookies, the cookies that are categorized as necessary are stored on your browser as they are essential for the working of basic functionalities of the website. We also use third-party cookies that help us analyze and understand how you use this website. These cookies will be stored in your browser only with your consent. You also have the option to opt-out of these cookies. But opting out of some of these cookies may have an effect on your browsing experience.
Necessary Always Enabled
Necessary cookies are absolutely essential for the website to function properly. This category only includes cookies that ensures basic functionalities and security features of the website. These cookies do not store any personal information.
Non-necessary
Any cookies that may not be particularly necessary for the website to function and is used specifically to collect user personal data via analytics, ads, other embedded contents are termed as non-necessary cookies. It is mandatory to procure user consent prior to running these cookies on your website.
SAVE & ACCEPT
STUDIO Telos VX Broadcast VoIP