The Sonifex RB-OA3 is a 1U rack-mount, unity gain on-air switcher, capable of switching three stereo pairs between three studios. Each studio can control the transmission path together with two peripheral paths for equipment such as a codec or hybrid and there is also a “Last studio to offer” bus, allowing for seamless and continuous broadcast from any multi-studio radio network. A “sustain” mode allows for a sustaining system, such as a PC automation system, to control the broadcast. Multiple RB-OA3 units can be connected together to switch more studios or more stereo pairs.

All studios are connected using 25-way D-types for electronically balanced audio signals and control is achieved using 15-way D-types, connecting to an external control unit such as the Sonifex S2-MTBS mixer control panel. A transmission mix connection is included to mix audio which is generic to all studios into the transmission path. This could be used for jingles or adverts for example. The RB-OA3 also allows for the control of a profanity delay to be shared by all connected studios.

The “sustain” mode can be used to control an automated studio, such as an overnight music system. In this case, station control will switch to the automated system by holding the Offer button down for a number of seconds, pre-determined by a calibration routine. This will select the sustaining studio, set as studio three, which will immediately offer control back to all remaining studios. Any studio can then accept to resume orthodox broadcasting.

The RB-OA3 can be expanded to switch between up to 5 studios or up to 6 stereo pairs by connecting multiple units together via RJ45 serial connections. With the addition of a single unit, expansion in “studio” mode allows for 2 additional studios to take control of the transmission path and additional equipment. If the expansion is made in “bus” mode, then three additional stereo channels can be added. 4 x RB-OA3 units can be connected together to switch 6 stereo pairs between up to 5 studios.

The modes are configured by dip switch configurations, on the rear of each unit. Two dip switches control the unit ID and there are two switches that decide between “studio” and “bus” modes. A master unit, defined by a preset ID, conducts all communication between all units. 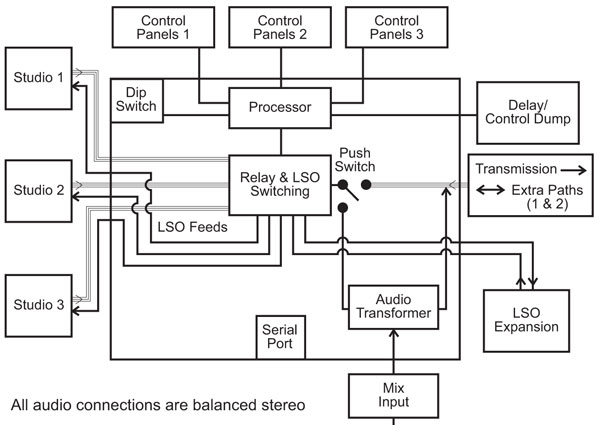 This website uses cookies to improve your experience while you navigate through the website. Out of these cookies, the cookies that are categorized as necessary are stored on your browser as they are essential for the working of basic functionalities of the website. We also use third-party cookies that help us analyze and understand how you use this website. These cookies will be stored in your browser only with your consent. You also have the option to opt-out of these cookies. But opting out of some of these cookies may have an effect on your browsing experience.
Necessary Always Enabled
Necessary cookies are absolutely essential for the website to function properly. This category only includes cookies that ensures basic functionalities and security features of the website. These cookies do not store any personal information.
Non-necessary
Any cookies that may not be particularly necessary for the website to function and is used specifically to collect user personal data via analytics, ads, other embedded contents are termed as non-necessary cookies. It is mandatory to procure user consent prior to running these cookies on your website.
SAVE & ACCEPT
STUDIO Sonifex RB-OA3