The Sonifex RB-DA4x5 is a 1U rack-mount combined distribution amplifier and mixer. It has 4 mono analogue audio inputs on female XLR and 4 groups of 5 outputs on 15 way D-type connectors. Each output group has a five-way front-panel DIP switch assigned to it which is used to select the input(s) to send to the output group. This enables each of the four inputs, or a 1kHz 0dBu tone, to be mixed to the output group.

The inputs and outputs are electronically balanced and can be wired unbalanced. Each input has adjustable gain using a pre-set potentiometer, providing a gain range of -8dB to +18dB. Each output is individually buffered so that a short circuit on one output won’t affect the others. The output gain of each group can similarly be adjusted between -8dB and +18dB using pre-set potentiometers.

The DIP switch settings and gain controls are recessed beneath a front-mounting screw-on cover so that settings can not be accidentally altered, for secure applications.

Four bright front-panel signal present LEDs show the levels of either the inputs or the output groups by pressing the AUDIO PRESENCE button. The LEDs will show green illumination from -12db through to 0db, amber from 0db through to +6db and red for inputs and outputs at +6db and over. 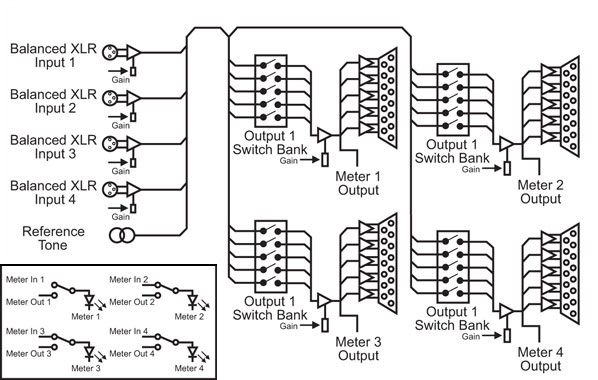 This website uses cookies to improve your experience while you navigate through the website. Out of these cookies, the cookies that are categorized as necessary are stored on your browser as they are essential for the working of basic functionalities of the website. We also use third-party cookies that help us analyze and understand how you use this website. These cookies will be stored in your browser only with your consent. You also have the option to opt-out of these cookies. But opting out of some of these cookies may have an effect on your browsing experience.
Necessary Always Enabled
Necessary cookies are absolutely essential for the website to function properly. This category only includes cookies that ensures basic functionalities and security features of the website. These cookies do not store any personal information.
Non-necessary
Any cookies that may not be particularly necessary for the website to function and is used specifically to collect user personal data via analytics, ads, other embedded contents are termed as non-necessary cookies. It is mandatory to procure user consent prior to running these cookies on your website.
SAVE & ACCEPT
STUDIO Sonifex RB-DA4x5